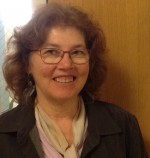 Hello! I’m Stephanie. The German language and culture have been part of my life since my first German classes in Mill Valley where I grew up. During my last year of high school I lived with a German family for several months, helping care for their two small children, and also attended the local Gymnasium (high school).

My language studies continued at U.C. Berkeley, where I completed a B.A. degree with majors in German and Linguistics. Altogether I’ve spent two years studying in Germany: one at Georg-August Universität in Göttingen and another at Albert-Ludwigs Universität in Freiburg.  I earned an M.A. in German from the University of Arizona in Tucson and taught beginning German classes to university students there.

In my free time I enjoy cooking, working on craft projects, and dancing. I’ve learned folkdances from a variety of traditions; currently I’m a member of the “Nature Friends Schuhplattler” dance troupe which performs at Bay Area German festivals. I’ve also studied French, at U.C. Berkeley and the Alliance Française in Paris, and taken classes in Dutch, Spanish, Italian, Russian and Hebrew.

After a long detour, during which I was the office manager at the San Francisco news bureau of the New York Times, I’m returning to my academic roots. I am excited to share my enthusiasm for German and language learning with the German School community